Jodhpur city, which is set at the edge of the Thar Desert, is an imperial city that has lots of tales of antiquity in the emptiness of the dessert in the past. Jodhpur was the capital of the Marwar State. Rao Jodha, the chief of the Rathore of Rajputs founded it in 1459 A.D. The city was once a major trade center. Now Jodhpur is the second largest city of Rajsthan.

Costumes and Languages of Jodhpur

While coming to the Jodhpur culture, there are a lot to tell about the unique and colourful culture of the people here. Whether it is the music, dance, food, costume, festivals or anything else, you can experience a royal touch that throws light to their glorious ancestry. That is why itself, you will realize that Jodhpuri people are amongst the most hospitable people of India. The desert people are quite friendly. They can win the hearts of the tourists with a sweet smile and warm hospitality.

The main languages spoken in Jodhpur are Hindi, Marwari and Rajasthani. But, people here have a typical Marwari accent. They also have a quite fascinating lifestyle. The folks in Jodhpur wear lovely multihued costumes. The dress of women folk here is generally wide gathered skirts and a hip length jacket that has three quarter length sleeves. It covers the front and back.  The women here like to wear jewelry on many parts of their body. They wear specific types of jewelry on feet, head, ear, nose, forehead, neck, arms, fingers, wrist and waist etc. The men in Jodhpur wear colourful turbans. ‘Jodhpurs’, which are the popular tight horse riding trousers, took their name from the city only.

The description of Jodhpur culture becomes completed only by explaining about various handicraft works done by the people here. The city is famous for embroidered leather shoes, antiques, tie & die textiles, clay figurines, marble inlay work, carpets, puppets and classic jewelries made of silver, glass and other metals. 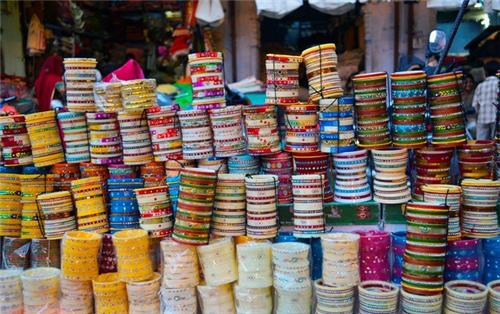 If you want to experience the typical food culture of Jodhpur, roam in and around Sojati Gate, which is one of the few places still untained by outside world. You have to taste the ‘Pyaz ki Kachori’ and ‘Chaudri ke Mirchi Vade’ not to make your visit a waste. While everybody put a full stop to food with a sweet item, Jodhpuri people starts their food by eating anything sweet. Sounds interesting? Sometimes, this may be the secret of the sugary tone of the citizen of the city. You can’t escape from the sweet hospitality of Jodhpur. Jodhpur is famous for many special types of sweets like ‘Mave Ki Kachori’, Besan Ki Chaaki’, ‘ Maakhan Vade’ etc.

In order to survive in water scarcity of the desert, Jodhpur people had to be innovative in the fine art of food preservation. Radis pods, cluster beans, large red peppers, mathi seeds, tamarind, raw mangoes for amchur, moony dal papads and Vadis are some of the preserved stuff included in the food here. They also use number of berries and roots found in the desert, which are healthy and herbal.

Jodhpur culture is also rich with several festivals. Beside the common festivals of India like Diwali, Holy and Navarathri, there are many unique festivals in Jodhpur. Kite festivals on January 14th, Marwar festival on October and Nagaur fair on January-Februvary months are the important ones among them. In Kite festival, the sky is filled with multi-colored kites of various patterns and dimensions. People of all age groups enjoy kite flying and take on bids to cut each other’s kite string. Marwar festival is colourful with various dances and songs that concentrate on the romantic lifestyle of Rajasthan’s rulers. Nagaur fair, which is one of the second largest festivals of India, lasts about eight days. Trading of camels, horses and bullocks are the specialty of this festival.

Dance and Music Culture of Jodhpur

Men and women of Jodhpur love dance and music. Jodhpur people sing devotional as well as festive songs like the songs of saint potes such as Meera, Kabir and Maloodas. The simple instruments like the Baara and Algoza accompany these songs to give beat or a drone to offset the poems. Music and dances which are accompanied by the beats of the chang, mandal and various other musical instruments are an unavoidable part of tribal people of Jodhpur. Most of the festivals in Jodhpur are colourful and musical with vibrant music and dance of the folks there.