Jodhpur district, which covers a total geographical area of 22850 Sq. kilometers of Rajasthan, adorns the position of second largest district of the state. The district is located centrally in the western region of Rajasthan. Jodhpur lies between 26 degrees 0 minutes and 27 degrees 37 minutes north latitude and 72 degrees 55 minutes and 73 degrees 52 minutes east longitude. While Nagpur and Jaisalmer bound Jodhpur in east and west respectively, Bikaner in the north and Barmer and Pali in the South share the border of this district. The distance between the north and south of Jodhpur district is 197 km and between east and west is about 208 km. Jodhpur district has 250-300 metres of height from sea level.

Jodhpur district is included in the arid zone of the Rajasthan state. The 11.60 percent of total area of arid zone of Rajasthan is covered by Jodhpur. The district also includes some of the area of the great Thar Desert in India. The climate of Jodhpur is not different from that of the desert. You can experience extreme heat in summer and cold in winter here.  The temperature may vary from 49 degree in summer to 1 degree in winter in Jodhpur. Sandstorm is also the specialty of Jodhpur climate and it will be a new experience from other regions of India. 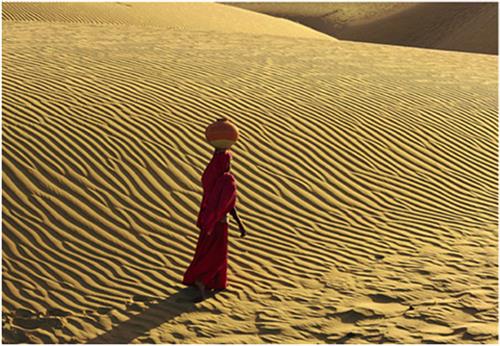 Jodhpur generally has a hot and arid climate. There is extreme hot throughout the period from March to October. It starts to reduce slowly only when thick clouds appear on sky in monsoon rain. However, during these periods of heavy rain, the generally low humidity rises and this may create discomfort from the heat. The rainy season in Jodhpur is from late June to September. The average rainfall here is around 360 millimeters. But it may vary extraordinarily.

Jodhpur district has no perennial river. There are important rivers in the district and they are Luni River and Mithri River. But, their base is saline water. So people have to depend on Drug-wells and tube-wells as the other main sources of irrigation besides rainwater. Bilara Tehsil followed by Bhoplgarh and Osian Tehsol are the highest-irrigated area in Jodhpur.

The geologists classify the soil of Jodhpur mainly as sandy and loamy. Bajra (Pearl millet) is the major crop in Jodhpur, especially in Kharif season. As Jodhpur is blessed with excellent groundwater in many areas, Rabi, pulses, wheat and various spices like dhania, jeera and red chilly are grown here. Red chilli, onion and garlic are the main crops here. Guar is also widely cultivated in Jodhpur. Sandstone and limestone are the important minerals of Jodhpur district. Fawn and red colored sandstone are found in abundance in the district. Building stones, stone slabs and flagstones are also mined in the district on a regular basis. The other minerals available here include quartz, clays of various colors and dolomite.

Even though Jodhpur has an arid climate, we can see forests in a rather negligible percentage of the total land of the district. But the sandy soil allows only scrub and thorny bushes of vegetation to grow in these forests. Kumat, Kair, Khejri, Jal Khara, Bir and Pilu etc are the main species of trees in these forests. The fruit bearing trees like pomegranates and guavas are also found here. Animals from the wild cat and jackal specimens are commonly found in the area. You can also find the birds like Baya, parrot, koyal, Jungle crow, bulbul, house sparrow, sand grouse, kite, grey partridge, little egrit and common quail in Jodhpur.