Lord Mahavira, the twenty fourth Jain Tirthankara has a beautifully ornate temple dedicated to him as the patron deity at the Ossian village located near Jodhpur in Rajasthan. The temple was constructed in the eighth century under the patronage of King Vatsa, the Pratihara king. The temple was constructed in 783 AD. The devotion of King Vatsa was apparent from the great lengths he went to and made his artisans to go to create the temples of such visual beauty and elaborate construction. Stone carvings and sculptures covered virtually the entire surface of the temple complex. Carving the scenes from the lives of Lord Mahavira and his disciples into sandstone, the artisans have given evidence of their tremendous skill. 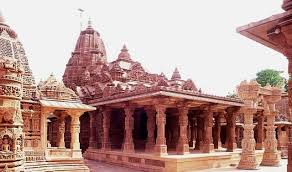 The imposing main door of the temple has the relief sculpture of young maidans while a series of large pillars, carved elaborately, form an impressive colonnade. They stand witness to the bygone centuries. While the main shrine was constructed first of all the other minor shrines which were added on and completed gradually by the fifteenth century.

The village Ossian is the place of origin of the Oswal Jains who have made a name for themselves in the world of business and commerce within and outside Rajasthan. These Oswal Jains have been greatly instrumental in the maintenance, development and propagation of the Jain temples situated in the Ossian village. The Oswal Jains have been regularly giving massive donations towards this purpose.

The main shrine of the temple is comprised of a santo-sanctorum that has the larger than life, imposing image of lord Mahavira who is shown as being seated in deep meditation trance on a raised platform made of sand stone that is high above the floor level to reach the eye level of the worshipers. The presence of the idol carved in stone is most awe inspiring for the devout Jains as also all others who visit this Mahavira temple of Ossian village.

The main shine has the unique feature of three storied windows that keeps the inner sanctum well ventilated and cool as well as brightly lit. There is also another porch, which was probably added on much later. This porch has several ornate pillars joining it to the earlier constructed shrine. The latter shrine has a number of elaborate embellishments and decorating elements that set it apart from the previously constructed, more simple edifice. Apart from this feature there is very little differentiation between these and other smaller Jain temples that are constructed in the same village.

The Mahavira Jain temple is a most suitable example of the Jain Temples of this era. It is among the most revered and one of the most important pilgrimage centres of the Jains. The entire temple stands atop a sandstone outcrop giving it a position of command across the desert land even while being located proximately to the Jodhpur township. Tourists and devotees from within and outside the country regularly visit the Mahavira Jain Temple of the Ossian village located very near Jodhpur city.