Rajasthan is a state that emits grandeur and personifies lavishness with a blend of kingliness in style. Each and every district or city situated within the state is centre of some sort of unique activity or monument. Be it the forts of the cities, the palace or the markets with exuding the culture of the state. It is one of those rare states which has kept their heritage intact even after centuries.

Among the different sects residing within the largest state in the western zone of India Jodhpur rulers were known for their elegance and lavish style. They not only built stylish monuments during the course of their lives but also inspired many shrines and cenotaphs after their death. One such popular and grand cenotaph, more commonly known as mausoleum is the Jaswant Thada, located only a few kilometers away from the massive Mehrangarh Fort and the grand Umaid Bhawan Palace. Although it does not consist of the original burial of the king in whose memory it was constructed but it is definitely one of the best mausoleums built is his memory. 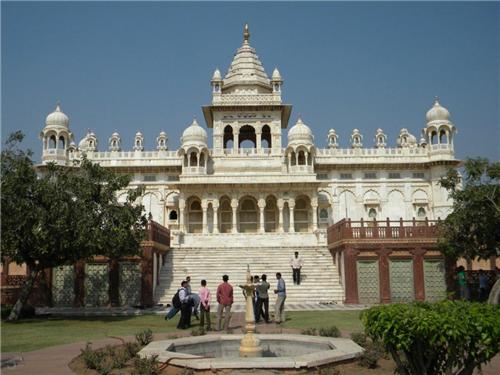 The Jaswant Thada tomb was built during the 19th century, around 1899, in memory of Maharaja Jaswant Singh II who was the thirty third descendant of the Rathores of Jodhpur. It was built by Maharaja Jaswant Singh’s son, who was known as Maharaja Sardar Singh in the loving memory of his beloved father. Two more mausoleums are resting within this specifically grand cenotaph and have the royal crematorium with 3 more mausoleums at a close distance.

Jaswant Thada is considered to be an epitome of architectural brilliance belonging to the 19th century. It is created in completely white marble, a stone popularly used by the Rajasthani as well as Mughal rulers in the monuments constructed by them. The marble sheets are thin and polished which makes them exude a warm off-white glow, every time the sun’s rays shone on it. There are intricate details carved on these marble sheets that have still remained unmatched by any modern or new-age sculptor. There is a huge terrace right in front of the Cenotaph as it is located at considerable height and presents an exquisite view for visitors.

The cenotaph is also decorated by the portraits of the several Rathore rulers depicting the lineage of the clan. It sits on a small lake and is only a kilometer away from the renowned Meharangarh Fort of Jodhpur. The structure includes a number of domes and is one of the most peaceful spots in the city of Jodhpur. The cenotaph also consists of a memorial dedicated to a peacock which had accidentally flown in to a funeral pyre.

The cenotaph is built amidst rocky hills which have to be climbed before reaching the main monument. This in turn lends a magical aura to the building as well the surroundings of the mausoleum of Maharaja Jaswant Singh II.

This architectural wonder created by the Rathore rulers is open to visitors throughout the year, daily from around 9 ‘o’ clock in the morning till 5 in the evening. There are extra charges applicable for carrying cameras or movie cameras and the entry fees vary for Indians and foreigners, wherein the latter is charged higher than that of the former. The best time to visit the place is from the month of November till February when the temperatures are a lot cooler and you can look around the monument at leisure without the desert sun shining on your head like a fire ball.


Explore more about Tourism in Jodhpur