Jodhpur as a Film Shoot Location

There’s a lot Jodhpur in state of Rajasthan has to offer than it normally meets the eye. The ancient city built in 1459 AD by Suryavanshi Rao Jodha is now dubbed as the second largest city in Rajasthan, standing rigid beside the Mehrangarh Fort, the mighty sandstone palace called Umaid Bhavan and several beautiful parks and gardens, cenotaphs and monuments. But what gives the city its grand and royal look is the fact that the entire city looks like a blue lagoon from a bird’s eye view. The reason is most of the houses in the city of Jodhpur have been painted blue which imparts an exotic aura and dazzles the tourists and visitors. 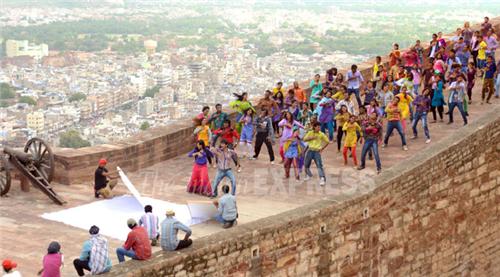 Jodhpur due to its fantasy world like houses painted a shade of blue have been host to innumerable film shoots held in its fortress, monuments, palaces, museums, gardens and parks. The erstwhile capital of Marwar, Jodhpur has always fascinated tourists with its archaic charm, despite the intense desert heat and scorching climate. Several films have been shot with Jodhpur as a backdrop like The Darjeeling Limited, Shakti- The Power, Autobiography of a Princess, Shudh Desi Romance and many others to pen down. But the city grabbed the spotlight when American director Christopher Nolan based his epic movie ‘The Dark Knight Rises’ with Jodhpur’s Mehrangarh in limelight where he shot a considerable portion of the movie on Batman series.

Moti Mahal, Seesh Mahal, Daulat Khana, Phool Mahal etc inside the mighty Mehrangarh Fort have been used as sets for several film shoots. Moreover, paint companies like Dulux also based its advertisement in Jodhpur using the blue city as its model. Visa, American Express, Pepsi and innumerable Ad commercials have been shot and are still shot in Jodhpur till date. The blue city with its mystic aura doesn’t fail to impress its audience ever. That’s the USP of Jodhpur- the picturesque locations where films are shot; Mandore, Kailana Lake, Osian, Mahamandir Temple, Jaswant Thada and the list continues. It feels like as if the city was created by the Rajput prince with a foresight that films might be shot in his state.