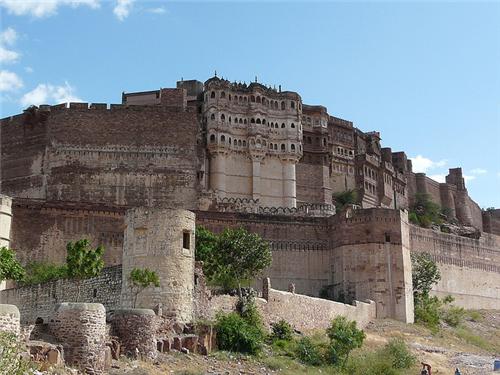 The city that is garlanded with so many citadels and forts leaves a magical impact on the travelers. With its charming, intoxicating ambiance and cultural, artistic flavor, it makes anyone feel connected with the surrounding. The city presents the facet of royalty in every nook and corner. The ancient structures unveil many stories of the bygone era and bring you close to the exciting and interesting past. Each and every brick tells the tales of the rulers, their fancies, wars and victories. The royal custom and the royal life is what depicted by the artistically marvelous buildings and structures.

The Giant Mehrangarh Fort
Mehrangarh Fort is one of the best examples of architectural brilliance. It is really a symbol of pride to the people of Jodhpur. Tourists from far across the world are attracted towards this masterpiece. Foreigners in large numbers crawl to this part of India to experience the beauty and charm of past. It is a great issue of interest for the art lovers too.

There is no doubt that it is one of the magnificent forts in India. Being located on an altitude of 150 m, the structure is considered one of the best tourist destinations. In 1459, it was founded by Rao Jodhan. The fort is connected to the city with a circular road.

Seven Entrances to Reach the Brilliant Citadel
Seven gates are there to reach the fort. Theses entrances bear the marks of various battles fought in the past. The second gate of the fort has marks of ball hits by armies of Jaipur during battles. One of the gateways is Jayapol, which means victory. Maharaja Man Singh built this gate to commemorate his fabulous victories over Bikaner and Jaipur armies. Another entrance named Fattehpol also means victory was established marking the celebration of marvelous victory over Mughals.

Inside the Fort
This giant fort is a great piece of art. It is designed beautifully. It has number of palaces and structures that stand as perfect examples of architectural excellence. The palaces are beautiful and withstand all the atrocities hurled by the rulers of the past. The Pearl Palace or the Moti Mahal is amazing. It consists of the Sringar Chowki, royal throne of Jodhpur.

This marvelous fort also has many temples, galleries and many other things of beauty and art. On the left side of the citadel there is the soldier Kirat Singh Soda's chhatri, an efficient and brave army man who gave his life in the battle against the kingdom of Amber.

Mehrangarh Fort is a must visit if you are planning a trip to the royal place Rajasthan. It is rich in history and has a magical ambiance that makes the travel enthusiasts feel close to the past.