Places to Visit Near Jodhpur

Jodhpur and its surrounding areas have for long been the seat of Rajputana royalty. Being at the helm of the Marwar Empire, the land is steeped in rich history and culture, which are beautiful to behold. Amidst the stark desert landscape of the Thar Desert, lie places that are a reminder of the royal Rajputana past of the land, and also the tales of grandeur and valor that have passed down through generations. The iconic forts, palaces, temples and natural reserves etc. make Jodhpur district a true marvel to behold and a delight for any traveler. 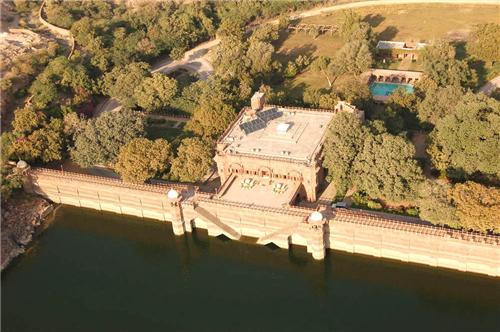 Balsamand Lake was artificially created as a reservoir in the 13th century, to supply water to the city, and lies almost seven kilometers off Jodhpur. Eventually on the shores of the lake was built a palace, in red sandstone and the traditional ornate Rajput style architecture, which was designated to be a summer palace. The lake now compliments the lawns and gardens of the retreat, as the palace in recent years has been converted into a heritage resort. The place is an idyllic spot for picnics and gatherings, and has also been touted as a bird watching haven. Know more....

Much before Jodhpur was decided to be the designated capital of the Marwar Empire, Mandore held the privilege till the 13th Century. Considered to be an oasis in the desert, Mandore lies almost eight kilometers north-west of Jodhpur. The ancient capital has many forts, temples and gardens to its name which are beautiful to behold. Home to the cenotaphs of the ancient Jodhpur Rulers, one of the main attractions of the place is the ‘Hall of Heroes’ which houses sixteen statues of Hindu as well as popular folk deities, and have been carved out of a single rock. For those with a deep interest in history Mandore is surely a treasure to behold. Know more...

The Bishnois of Rajasthan are famed natural conservationists, and the community is known for preserving and nurturing all the flora and fauna that surrounds them. Guda Bishnoi is a group of villages that lie almost 25 kms from Jodhpur, and are a peek into the picturesque community life, which survives and thrives in the lap of nature. One can see herds of Chinkara and Black Bucks roaming around freely in the villages, which is a common sight around.

Sardar Samand Lake served as a hunting ground for the Jodhpur Royalty for ages, and eventually Maharaja Umaid Singh built a hunting chalet in Art Deco style on the grounds, by the lake. Since its inception the chalet has been converted into a resort, that offers all the modern luxuries. It is surrounded by tiny villages in the entire fifty five kilometers stretch, and one can indulge in the lap of nature, along with partaking and observing the traditional Rajasthani lifestyle. 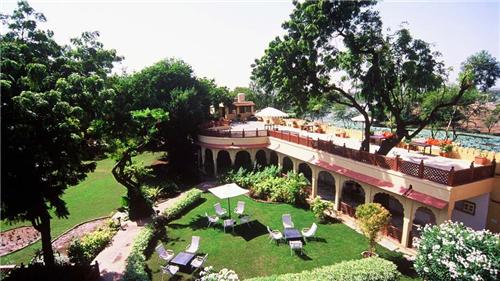 In the lap of the Thar Desert lies the ancient town of Osian, which is an architectural marvel and an archeological delight. Surrounded by the golden dunes and little hamlets on the side, the town is home to sixteen temples that are of Hindu and Jain origin, and have been carved brilliantly out of stone. The most famous temples to visit in Sachiya Mata Temple, Osian include, Kali Temple, Jain Temple and the Sun Temple. A visit to Osian is a must for anyone who loves ancient history and architecture.

Located forty kilometers from the city of Jodhpur, Rohetgarh houses Champawat fort, built in 16th century it has been changed into a heritage hotel now. The fort is home to the opulent luxuries of the Rajputana royalties and one can see glittering chandeliers, Persian rugs, paintings, trophies etc. An indulgent blend of luxury and royalty, Rohetgarh is a unique experience and that should be taken in once for sure.

Khimsar houses a 16th century fort which has been turned into a heritage hotel, however what makes this fort different from the others, is the population of different bird species that reside there. For nature lovers and seasoned bird watchers, the place offers almost forty-six varieties of birds that are an absolute delight to behold. The lap of nature and royalty, is something that Khimsar offers to anyone who visits, and the melodic chirpings and beautiful colours of the birds enthrall anyone’s heart.