Deserts can be as mesmerizing to the human eye, as hills and oceans, and a tourist who has made the full reconnaissance of the state of Rajasthan in India is very likely to know that. One of the most iconic cities in Rajasthan to have romanticized the desert ecosystem, beyond conventional belief, is Jodhpur and the beautiful Rao Jodha Park bears strong testimony to that fact. 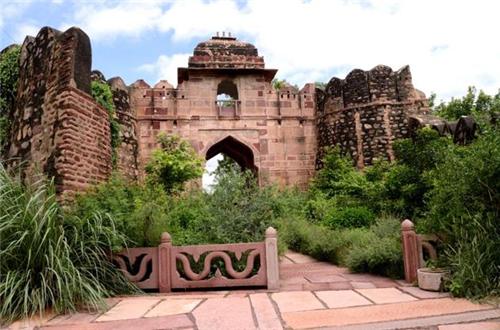 Inaugurated in the year 2012, for tourists and visitors, Rao Jodha Park in Jodhpur has a special history to its name. Not only is the Park presently an asset to the city of Jodhpur, it also represents the results of one of the most astonishing environmental drives undertaken in India in the recent years.

After years of mismanagement of the ecology of the desert regions in and around Thar, most of this region had been disfigured beyond acceptable limits, with vast tracts of land being invaded by a South American shrub, known as Baavlia. The presence of this poisonous shrub on the volcanic Rhyolite soil in the area made it impossible for government and privately funded agencies to undertake any kind of ecological development work here.

In 2006, under the astute leadership of Pradip Kishen, a renowned botanical expert, a group of rock miners (locally known as Khadwalias) hatched an ambitious plan to rejuvenate the ecology of the area surrounding Mehrangarh Fort in Jodhpur. The plan involved completely uprooting the Baavlia shrubs and replacing them a species of plants, known as Lithophytes, which shall be able to adapt to harsh environment of the region, very quickly. After six years of excruciatingly hard work, Kishen and his men reaped a rich harvest of rewards – in 2012, when the Park was made open to the public, it had transmogrified itself into a pool of more than 300 species of trees.

Jungli Pyaaz (Indian Quill) – Considered to be one of the most useful species of plants, usable in Ayurvedic medicine, the Indian Quill is generally found growing in the wastelands of Middle East and Africa. Rao Jodha Park is the only place in India that has found the right conditions to cultivate this plant.

Rohido (Desert Teak) – The wood obtained from these trees is considered to be one of the best varieties of carving wood available in India. Besides, the bright orange flowers adorning the plants are a treat to the human eye.

Bui (Desert Cotton) – This is the most popularly used species of cotton used in the arid regions of Western India, and the local people use it in their pillows and mattresses.

By Road - The Rao Jodha Park is located on the periphery of the city of Jodhpur, adjacent to the famous Mehrangarh Fort. Buses and taxis are most commonly used modes of public transport to reach the park; private vehicles, plying along the national highways, are also used to visit the place.

By Rail - Jodhpur Railway Station serves as the nearest railway link between the Rao Jodha Park and rest of the country, via railways. There are express trains plying between Jodhpur and most of the major metropolitan cities in the country.

By Air - Jodhpur Airport is served a number of domestic and international airlines which operate regular flights between the city and various other places within, as well as outside, the country.

Best time for tourists:
The Rao Jodha Park in Jodhpur is found fully resplendent its greenery when the monsoons hit the western parts of India. The months of July, August, September and October thus constitute the best period for tourists, during the calendar year.