A little distance from Jodhpur is the village called Osian. It is here that is situated the Sachiya Mata Temple or the temple of the True Mother Goddess. The Sachiya Mata is the ‘Kuldevi’ or the presiding deity of the Parmar King whose name was Upendre. He had built the temple in honour of the Sachiya Mata in the ninth and tenth century. 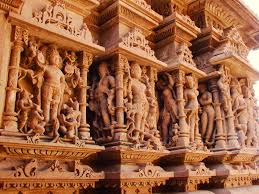 History of the Temple

Methodologically the story goes that Sachi, the Goddess, had been the daughter of king Pauloma who was a ruler of the region. The chief of King Pauloma’s army was Vrut and he harboured a desire to marry Sachi. However, when he approached with the proposal of marriage, princess Sachi felt insulted that the proposal had come from someone beneath her rank and position. When he came to know the reason for his rejection he discontinued his service with the king and set himself to propitiating Lord Shiva for a boon. His penance was regarded with a boon. The boon was that no known weapon would be able to kill Vrut. Fired by the enthusiasm of having such a powerful boon, Vrut assembled together a great army and launched attack on a number of Aryan Kingdoms to create for himself a monarchy larger than that of king Pauloma.

Seeing the relentless onslaught of Vrut, the chief of the Gods, Lord Indra decided to defeat the invincible Vrut. Before waging war on him, however, Indra decided to obtain a weapon that would stop Vrut in his tracks. He requested Rishi Dadhichi to sacrifice his tounge bones for saving the Aryans. The bones of Dadhichi were used to make the legendary weapon called Vajra which is the toughest and most unbreakable among all the  weapons of war. This unique Vajra was used to kill Vrut and put an end to the mindless killing. Indira had drawn Vrut to single, one to one combat to ensure that there was no unnecessary killing. He also told Vrut that the winner of the combat would get to marry the princess Sachi. It is to commemorate Sachi’s victory through Lord Indira that the temple was raised in her honour.

According to legend, preserved inscribed in stone, however the story goes that the renowned Jain monk, Vijay Ratna Prabhasurji had travelled to the Osian village to perform certain ceremonies known as ‘Anjan Salakha’ which was in the symbolized singularly ritual form of purification form of a purificatory ritual that is all the more significant in the presence of a newly created temple. According to this tale the temple at Osian had been ruled by the King called Upal Deo.

During those times Osian was called Upkeshpur and was renowned for its Jagat Bhavani Chamunda Mata Temple. There was a ritual in practice at this temple whereby anybody seeking the special favour of the Goddess offered ‘balli’ or animal sacrifice of a young ox or bull calf. The number of such sacrifices went up dramatically especially during the Navratras. When the Jain monk came to know of this abhorrent practice he approached the king and his minister to do away with this evil form of animal slaughter in the name of worship and appeasement of the great Goddess.

While he managed to turn the king and minister to his line of thinking he incurred the wrath of the Goddess herself. She is said to have tortured the monk relentlessly. Nevertheless, the virtuous monk succeeded in influencing the Goddess as well with his sheer restraint and sincere devotion.

The Goddess is said to have declared publically that she would not accept any animal sacrifices nor any more offerings of blood. In fact nothing red, not even red coloured flowers were acceptable to the goddess from that time onwards. She also became the patron goddess of her Jain worshippers. Once this happy instance had occurred, the Jain monk celebrated the Goddesses name as Sachi Mata or the Real or True mother. All over Rajasthan and Madhya Pradesh the Goddess is known by variants of this name – Sachi Mata, Sachiya Mata or even Sachiyay Mata.

True to her promises, the Goddess accepts being worshipped with ‘lapsi’, a kind of sweatment, sandal, incense in the form of dhoop and also saffron.

Structure of the Temple

The Sachiya Mata Temple was constructed in the eighth century and the current temple complex has additions that were raised during the twelfth century. The entire temple complex comprises the main shrine dedicated to the Sachiya Mata and two additional temples of Chandi ka Mandir and alongside it is the Amba Mata Mandir. Both these additional shrines were constructed around 1178. Some other minor additions were also made in the twelfth century.

The singular part of this temple’s appeal is its aesthetic architectural design and lay out. The temple entrance is made up of a series of arches that have been beautifully sculpted. The interiors of the temple are replete with a number sculpted figurines of Hindu Gods and Goddesses. Towards the eastern apect of the temple, however, there is the imposing image of Lord Vishnu and Goddess Lakshmi. Towards the North of the complex is located the impressive sculpture of the sculpture of the ‘Varaha avatar’ or the Wild Boar incarnation of Lord Vishu. The western wall of the temple complex has an out jutting slab of sand stone on which are a number of figures and sculptures of various gods and goddess of the Hindu pantheon.