Hinduism has always been source of zeal and courage for the kings and soldiers in the land of Jodhpur along with the rest of Rajasthan. Religion is an integral part of the culture and lifestyle of the people of Jodhpur. Even today worshiping the Hindu deities is considered as the most important task of their daily life. In spite of having a very strong presence of ‘Hindutva’ in the region, Jodhpur has space for all religions which exist in our country as well as across the world. The city has churches, mosques, Gurudwaras as well as Jain temples alongside Buddhist monasteries. Jodhpur is quite a peaceful region in terms of any kind of religious strife even though its history suggests a huge struggle between the Rajputs and Mughals and the Rajputs and British.

Although the city has a number of religious monuments, belonging to different religions, the number of temples is considerably high and also popular in the region. Some of the most popular temples in Jodhpur which receive a fairly high number of visitors, on a daily basis are mentioned below with brief descriptions about them.

Chamundaji Temple- Jodhpur’s Chamundaji Temple also referred to as the Chamunda Mataji Temple is one of the most popular and frequently visited temple of the town. It is located towards the southern side of the popular, grand and sturdy Mehrangarh Fort. The term Chamunda refers to one of the most powerful Hindu goddesses who used to be the favorite goddess of Rao Jodha. He had immense faith in the goddess and addresses her by the name of ‘Chamundaji Mataji’  in which ‘Mataji’ meaning ‘mother’. Goddesses in India are compared to mothers as they are given the position of creator, protector and savior of mankind.

In the year 1460, he carried her idol from his previous capital that was at Mandore and finally was placed in the Mehrangarh Fort. Even today, the goddess remains renowned by the name of Isht Devi meaning ‘the adopted goddess’ belonging to the Maharajas and members of the Royal Family.
Most citizens of Jodhpur worship the Chamunda Mata even today. At the time of the festival of Dussehra, the Mehrangarh Fort is crammed with devotees only to get a glimpse of Chamunda Devi. This temple is a must visit for al those religious tourists and those who are devoted to the Goddess. 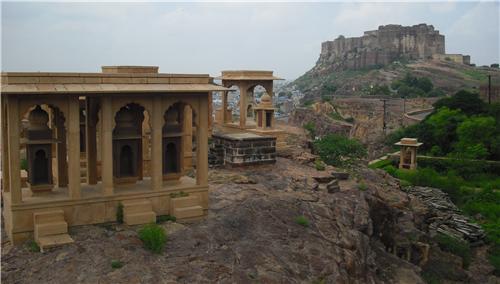 Raj Ranchhodji Temple- Another frequently visited temple in Jodhpur, which was established by Maharani Jadechi Rajkanwar in rememberance of her husband. A considerable section of the temple has been built with red stones with gorgeous and extremely creative filigree carvings on them.

The idol of Lord Ranchhodji which has been carved out of shiny black marble is presiding inside the temple. The entrance door of this comparatively small but beautiful temple is designed with decorative stained glasses of different colors such as yellow, blue and green. It is one of the most beautiful temples built in extremely elegant taste as desired by queen Jadechi Rajkanwar.

Siddhanth Shiv Temple- The Siddhanth Shiv temple is another place dedicated to the powerful Lord Shiva. The temple is strategically located between Takhat Sagar hills of Rajasthan which makes it a little difficult to reach it. Visitors to the temple need to take the Chopasani Road in Jodhpur and proceed from the right side of the Filter House and climb a number of stairs cut out from rocks to reach the entrance of the temple.

The current location of the temple was a completely deserted place prior to its construction and this isolation and serenity attracted the hermit Veetragi Narain Swami who took shelter there. He was later declared as a highly regarded saint, respected and worshiped by the people residing in neighboring areas.

After a point of time, a saint called Gaurishanker who later became famous as Nepali Baba, also visited this place. He was physically challenged as there were only 4 fingers on each of his hands and even foot. He was the one who finally constructed the temple by cutting large rocks and stones which came to be known as the Siddhanth Shiv Temple of Jodhpur. 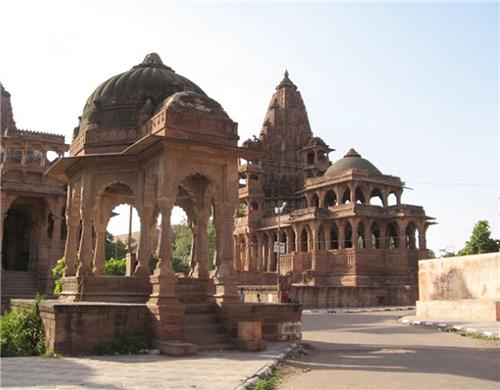 Achal Nath Shivalaya- The Achal Nath Shivalaya is quite a prominent and renowned temple in Jodhpur that is dedicated to the great Lord Shiva. It was established by the Queen of Rao Ganga, referred to as Maharani Nanak Devi of Jodhpur, which was completed by the year 1531.
The temple has a massive reservoir of water, which is commonly known as Bawari in the local language of Rajasthan. This reservoir was constructed near the Shiva Linga or the common black idol of Lord Shiva that is seen everywhere, which came to be known as the Ganga Bawari, representing the emergence of Goddess Ganga from the head bun of Shiva.

The temple is divided in 3 separate sections namely the Garbha Griha which houses the Shiva Linga, the Mandap Bhawan which refers to the area where the priest offers his regular prayers and the last is the Kirtan Bhawan wherein the devotees can assemble and participate in Kirtans (songs dedicated to Gods and goddesses) as well as seek blessings of Lord Shiva. All 3 of these sections have been made out of Chittar or yellow stones which glow under the sunlight, lending an ethereal aura to the temple. 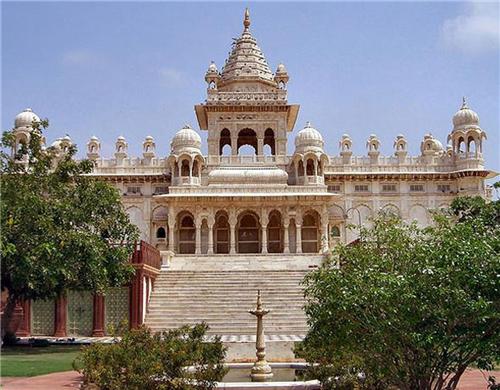 Udai Mandir- Udai Mandir, where the term ‘Mandir’ means temple simply an architectural wonder. Those who enjoy taking tours of buildings that have simply awed the future generations of architectures in India, must pay a visit to Udai Mandir in Jodhpur Rajasthan. The temple gate is made of carved sandstones and the main temples stands on a massive platform which is supported by around 102 pillars.

The Temple has gold pots preserved inside it which have still retained their original glow and quality. The walls of the temple have beautiful wall paintings that depict 84 Yogasanas alongside images of Nath Yogis that have been carved from gold. This temple is the perfect haven for the true connoisseur of marvelous architecture.

The temple has large halls meant for public meetings constructed with pillars made of red stone and are addressed as Sabha Mandaps. The inner section of the temple which consists of the Rasik Bihari idol is the Garbha Griha that is surrounded by a large circular gallery meant for devotes to take rounds (Parikrama) around the Garbha Griha. This part of the temple is made of white stones and consists of the idols of Lord Krishna and Radha. Visitors can also find idols of Lord Vishnu, Hanumanji (The Monkey God) and Garuda (The Eagle God) within the temple complex building. The temple also has the idol of Adi Vinayak Ganeshji (The Elephant God), placed at the entrance to the main hall of the temple.

Kunj Bihari Temple- The Kunj Bihari Temple of Jodhpur is another example of architectural excellence in Rajasthan. The upper portion of the temple and the main entrance are alone capable of drawing visitors to the temple. This temple is must see for all the followers and devotees of Lord Krishna as it is solely dedicated to him with idols of people closely associated with him.

An instance of that is found at the entrance of the temple itself as it consists of the idol of Meera Bai, the only true and selfless lover as well as devotee of Lord Krishna. Within the temple one can find the Garbha Griha (Central compartment of the temple) houses the idol of Lord Krishna, which is skilfully placed face-to-face with the idol of Meera Bai which is placed at the entrance. On both sides of Meera Bai there are two more idols-the one that is on the left is of Pawanputra Hanumanji’s and the one on the right depicts one of the devotees of Krishna, known as saint Namdeo.

Baba Ramdeo Temple- This temple is very simple yet attracts a large number of devotees because as per local lore it is very risky to enter this temple and many people have not returned since their visit to it. Although this should scare off people but strangely this mysticism associated with the temple is what attracts the tourists here. Apart from this many mythical legends and stories are associated with the Baba Ramdeo Temple and right at the entrance of the temple there is a rock which the sentence “Enter at your own risk” inscribed on it in tiny letters.

The temple, also referred to as the Adhar Shila Temple, is situated between Nagori and Jalori Gates of Jodhpur, on top of hill made of sandstone. This temple is considered to be a symbol of religious devotion and duty and due to its mystical nature, it attracts attention of visitors who love adventure. 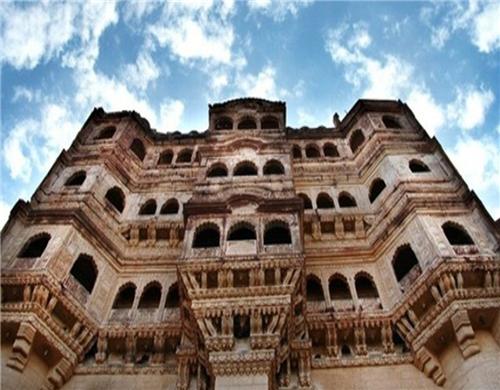 Apart from these popular temples, there are few more places which can be visited alongside these, if you have enough time in hand. Those temples of which receive quite nominal visitors are as follows:
So, if you are an admirer of old and mystical temples with loads of stories behind them then do not miss out on these temples on your next visit to the magical land of Jodhpur.