Umaid Bhawan is a well known name across India. It has earned its name due to its current state rather than the history attached to the creation of this majestic work of art. It has been transformed to a lavish hotel from its original development as a Royal Palace of the Rajput sect of Rajasthan. Earlier it was the abode of the kings and queens belonging the state of Rajaputana which is now divided into different cities, towns and villages.

The Umaid Bhawan Palace Hotel currently has a set up which is a stark contrast to its preceding culture of kings and queens. It is equipped with all the modern amenities of a 5-star or 7-star hotel and is in itself a tourist’s haven. It is the ideal family abode for travelers with an extravagant travel budget. There are several tourist spots around the palace for daily tours and is sufficient for a week’s trip. It has been converted from a real palace to one of the largest private residencies of the world by the Taj Group of Hotels. 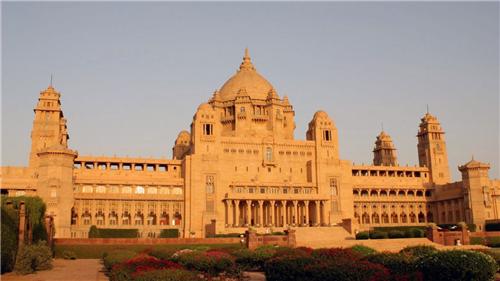 History and Construction of Umaid Bhawan

Named after the King Umaid Singh, the Umaid Bhawan Palace was originally known as Chittar Palace since the stones used to build the architectural wonder were locally referred to as Chittar. The first stone of the building was laid down in the year 1929 by Maharaja Umaid Singh and was completed in the year 1943, not too long before the Independence of India. At that time, the motive of building the palace was quite noble as it was meant to provide employment to thousands of construction workers as the state was hit by long spell of famine as a result of drought.

The palace is a unique blend of both Victorian and Rajasthani architecture. It was formulated as a result of an association that developed between Maharaja Umaid and a renowned Edwardian architect of contemporary period, named Henry Lanchester. It was built across a massive area of nearly 10 lakh square feet which is around 90,000 m2 with the use of Chittar which in English are commonly known as sand stones, providing the palace with a yellow tinge.

The central-dome that was constructed comprising if the Throne room is still maintained as it was instantly after its construction. The cupola is almost as high as 105 feet with murals of Ramayana painted on the roof with blue translucent glasses, a library, an indoor swimming pool known as the Zodiac Pool and private library.

The palace as a whole was built with 347 rooms and a dining area right in the midst of the front garden. It has a large and Majestic courtyard with well-maintained bushes and a fountain along with a large space around the palace for a lavish garden. 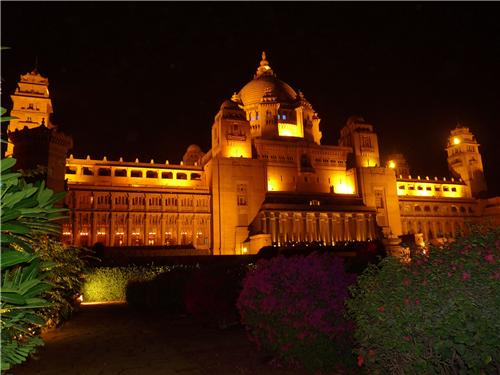 Conversion into a Heritage Hotel

The Umaid Bhawan palace was transformed into a lavish Heritage hotel in the year 1977 and was divided into 3 sections-the Royal Residency, the Museum and the Hotel area. The members of the royal family still live in the Royal residency and currently comprises of the family of Maharaja Umaid Singh’s grandson.

The Heritage Hotel has 32 rooms which are divided into 3 types in order of grandeur and expense-Historical Suite, the Maharani Suite and the Maharaja Suite with a grand lobby area. The historical suite is the smallest in size in comparison to the other 3 and the Maharaja suite is the most expensive and largest in size. The bathrooms are to die for since they are equipped with lavish and stylish state-of-the-art bathtubs and other bathroom fittings including a separate shower areas. The historical suites have a separate seating area while the Maharani and Maharaja Suites have separate drawing and dining areas within the suite which are furnished with royal furniture.

It has 3 different restaurants that are differently architecture and serve different cuisines - Pillars, Aarogan and Risala.  Pillars has a terrace area with breakfast, lunch and dining facilities, Aarogan serves exquisite Indian cuisine which includes the delicacies of Rajasthan while Risala serves a combination of both Indian and continental cuisine. All the three restaurants are decorated with royal and highly maintained furniture and well trained staff. The hotel also has a unique bar named The Trophy bar with heads of animals hung as trophies acquired at hunting expeditions that inspired the name of the bar.

The hotel also has a beautiful Outdoor pool which presents an exquisite site at the time of sunset, following which the Blue city- Jodhpur appears like a city of stars which we can see by looking down at the city rather than looking up in the sky. Peacocks are a frequent and common visitor in the La Vista garden of the palace in the day, which adds to the royal elegance of the palace.

The museum has one of the best collections of royal paintings, a miniature model of the entire palace, Rajput weapons and royal clothes and memoirs. This is open to visitors all round the year but the hotel area and the royal residency is blocked for tourist tours, unless they are residing in the palace.

The hotel has a very royal way of treating their guests as their welcome procedure makes you feel like a King or a Queen. Flower petals are showered on you while you walk up the stairs laid down with red carpet with a Chaadar covering your head as you walk inside the palace. The adults are greeted with a glass of Champagne poured fresh from the bottle and the staff attending you from your first step inside the city.

All in all, a stay in the Umaid Bhawan Palace is worth the big bucks and an unforgettable royal experience.